Although Costa Rica is a small country in terms of area, there is a lot going on here in terms of Costa Rica weather. With a climate that is diverse and varied, Costa Rica can be divided into several climatic zones, each of which are distinct and individual. Though generally classified as a tropical country because of its close proximity to the equator, Costa Rica has no real winter period, and the sun shines here throughout the year. With over 12 hours of sunshine a day, the sun rises at about 5 am and sets at about 6 pm consistently throughout the year. 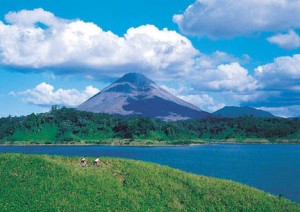 The main reason for the diversity in Costa Rica’s weather is the various elevations at which different parts of the country are located. For example Guanacaste has a dry arid climate as it sits on the lowlands, while Montverde a highland city that is misty and foggy throughout the year due to its higher elevation. The Central Valley with San Jose enjoys the best climate in the country as the weather here has an average of 22 degrees Celsius or 72 degrees Fahrenheit and is tempered with a cool coastal breeze. In the highlands the temperature averages 13 degree Celsius, while in the lowlands or at sea level the temperature stays at around 26 degrees Celsius or 79 degrees Fahrenheit, with hot days and sultry evenings.

In Costa Rica the average annual temperature is around 21 to 27 degrees Celsius or 70 to 81 degrees Fahrenheit and the coolest months of the year are November, December and January. The months March through May are the hottest months of the year, so make sure you protect yourself from the sun.

There is no real summer or winter in Costa Rica and the rainy season here lasts from May to November, with the months of December through April having little to no rain and September and October being the heaviest rain period. While the average rainfall in the country is around 100 inches, some mountainous areas get as much as 25 feet of rainfall on a yearly basis. It is also important to keep in mind that Costa Rica’s Caribbean coast is rather unique and has its own microclimate. With tradewinds keeping the weather hot and humid most of the year, there is no real dry season out here and it rains very often.