Most guidebooks gently caution tourists against venturing into Costa Rica’s capital city, San José. They warn against unsightly characters and pickpocketers and tell readers that it’s best to head for the beach as soon as possible. And while it’s true that the metropolitan area is just a tangle of narrow sidewalks and traffic-choked streets, Barrio Amón is a sliver of Costa Rica’s urban jungle that’s not to be missed. 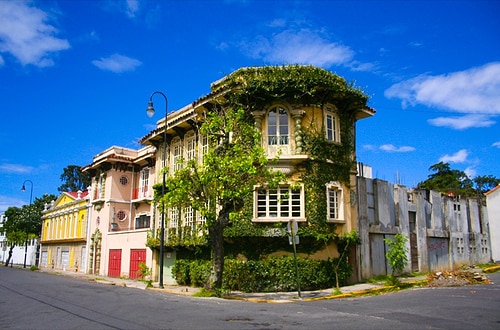 Just north of San José’s National Theatre, Barrio Amón is a neighborhood emerging from a decade of neglect and smothering crime as a new destination for locals and tourists. One of the oldest neighborhoods in San José, the small corner of the capital is showing daily signs of revitalization.

Along with a handful of new cafe’s and eateries – such as Kalú (Tel: 2221-2081), Caracas (Tel: 2258-6565) and Arte y Gusto (Tel: 2257-0153) – the city has invested in new lighting for the parks, tourist police and several beautification projects, which include widening of sidewalks, landscaping and building restoration.

What to See in Barrio Amón

Wander down the Paseo de las Damas, named for avenue that unmarried women would dress in their best garments for a Sunday stroll in the hopes of catching the eye of a desirable suitor. Pass the Escuela Metallica, a gift from the government of Belgium and stop in the Jade Museum, which is rumored to have the largest collection of jade in the world (though jade is not native to Costa Rica).

How to See Barrio Amón

The best way to discover this hidden gem is to sign up for a barrio walking tour with Indiana-native Stacey Auch, a 29-year-old entrepreneur who has pieced together amusing anecdotes and neighborhood history to create a fact-filled two-hour walk. Auch is actively involved in efforts to revive the area, encouraging locals and foreigners both to ‘rediscover’ Barrio Amón.

She’ll take you into local art galleries where you might run into one of the artists, through the old distillery (now the culture ministry) and by the famous National Theatre, which was built by a self-imposed tax on the coffee barons. The entire tour includes more than 40 stops. Her clients say the tour is “not to be missed” and “sheds a new light on San José.” Reservations can be made online at barriobird.blogspot.com or by calling (506) 8926-9867.
Where to Eat in Barrio Amón

Museums to See in and around Barrio Amón

The afternoon can be spent in further exploration, venturing into one of the museums that caught your eye along the tour. Museums of note include the Gold Museum (Tel: 2243-4202) with an impressive collection of pre-Colombian figurines; the National Museum (Tel: 2257-1433), which is housed in the country’s old army barracks; and the Jade Museum (Tel: 2287-6000).

Other Things to do in Barrio Amón

But if you are not much of a museum goer, you can peruse Costa Rican albums and books in the English-language bookstore, Seventh Street Books (Tel: 2256-8251), stretch out from the long plane ride at Downtown Yoga  (Tel: 8926-9867), shop in the artisan stalls in front of the National Museum or Galeria Namu (Tel: 2256-3412) or preview Costa Rican wildlife by stopping by the local zoo, Parque Simón Bolivar (Tel: 2256-0012). And if you are in town for the evening, you might stop by Bar Morazán, ChuBBs or Key Largo. Be careful after dark though. When the sun goes down, the streets are taken over by prostitutes, transvestites and petty crime thieves, who – at times – wander into the bars.

While San José’s Barrio Amón is not the reason most venture to Costa Rica, a country known internationally for its white-sanded beaches and dense rainforests, it shouldn’t be shrugged off as crime-ridden and irrelevant: the historic neighborhood of the city is in itself, a hidden gem.